The engine dates from the late 1830s and is housed in a Category A listed building. The engine originally powered a textile mill but it has not worked since 1904.

The beam engine consists of a double acting piston and cylinder arrangement connected to the beam by a parallel linkage.  The bore size is thought to be 18” but the cylinder is currently obscured by lagging.

The 17 ft long beam has an ‘acorn’ joint for the connecting rod that drives the crank and 16 ft diameter cast iron flywheel which has a barring plate set into the wall.  The acorn joint removes the need for exact alignment between the beam and the crankshaft assembly.

The steam is controlled using a slide vale assembly on the side of the cylinder which is connected to a single eccentric on the crankshaft via a lattice rod. As the engine was driving wool spinning machinery there was no requirement to reverse the engine.

The engine appears not to have been modified since it was installed although records indicate that a new cylinder was installed in 1870.  All major parts of the engine are still in place and in reasonable condition (linkages, condenser, air pump, feed pump etc) although some bearings are missing.  Valves, non-ferrous parts etc are absent as is the boiler and steam supply pipework which were removed in the early 1920s.

The age and manufacturer of the engine is a matter of speculation as nothing has been stamped or cast onto the engine itself.  Research in Aberdeen City archives on Alexander Hadden and Co have been not yielded much as records from this time are sparse.  A theory put forward by previous researchers is that the engine may have been built by the Glasgow firm of Mitchell and Neilson who started in 1836-37 making marine and stationary engines.  The company went through a number of iterations and changes of ownership (mostly within the Mitchell and Neilson families) and by the 1860s they were concentrating on steam locomotives, eventually becoming part of the famous North British Locomotive Company in 1903.  The engine is remarkably similar to a blueprint of one of their engines.

The Garlogie engine is a late example of what might be termed the early phase of rotative steam engine design.  Early engines were all built with the cylinder vertical as it was thought this prevented excessive cylinder wear by the piston (although steam locomotive experience at this time was beginning to prove this theory wrong).  The beam engine arrangement facilitated the most compact engine layout given this constraint.  Early beam engines used the walls of the engine house to support the beam, later engines used a separate entablature (set of supporting columns) to support the beam, making the engine structurally separate from its building. Garlogie represents a halfway house in this respect, with both a supporting cast iron column under the beam pivot and substantial iron girders built into the walls of the engine house.

The engine consists of a single cylinder which is wasteful as it meant exhausting the steam after each stroke rather than using it again in a second or even a third lower pressure cylinder, as was the case for most large engines from the 1840s onwards.  Concerning the valve gear, the design is inefficient as steam cut off happens quite late in the piston travel, meaning the possibility of expansive working by the steam is reduced and more steam is consumed than necessary for each stroke of the piston.  Regarding speed control of the engine, the early Watt governor design is rather unresponsive and wasteful in the way it regulates the steam supply in order to maintain a constant speed.  The above design points and others make the Garlogie engine an interesting and important case study in the story of steam engine development.

A note found in Alexander Hadden and Sons records dating from 1904, when the future of mill was being discussed, gives an insight into the economics of the beam engine operation.    Assuming it was giving 50 HP to the mill, experience indicated that it consumed 1 ¼ tons of coal per day.  1 ¼ tons of coal at Aberdeen was priced at 13 shillings, which rounded up to 16 shillings at Garlogie.  Assuming 295 working days gave an annual cost of coal of £236.  To that would be added fireman’s wages of £50 per year, giving £286 per year cost of year round operation of the beam engine. This gave a convenient figure for calculating the value of the water power supplied to the Mill, which was needed for delicate negotiations regarding the value of water rights to the mill.

When the Royal Commission for Ancient and Historic Monuments Scotland (the forerunner of Historic Environment Scotland) took an interest in the preservation of Garlogie Mill, it was decided to commission a set of black and white photographs and dimensioned draughtsman’s views of the beam engine.  This work was undertaken in the late 1970s and provide a superb record of the surviving machinery. 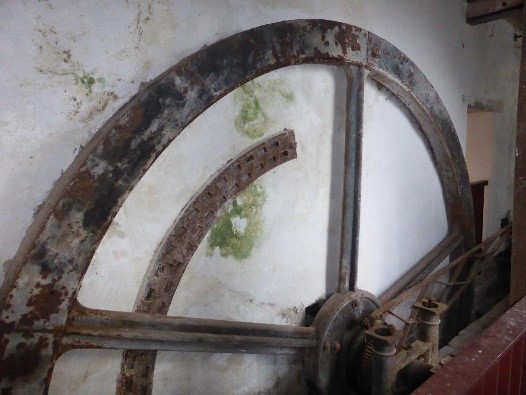 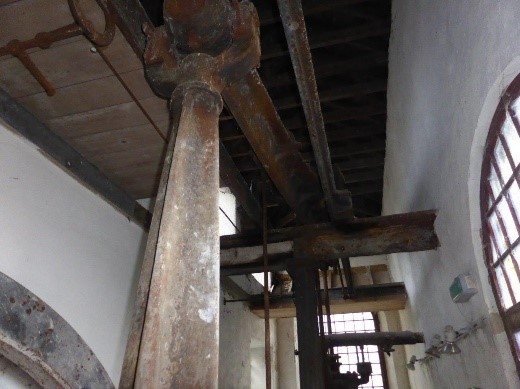 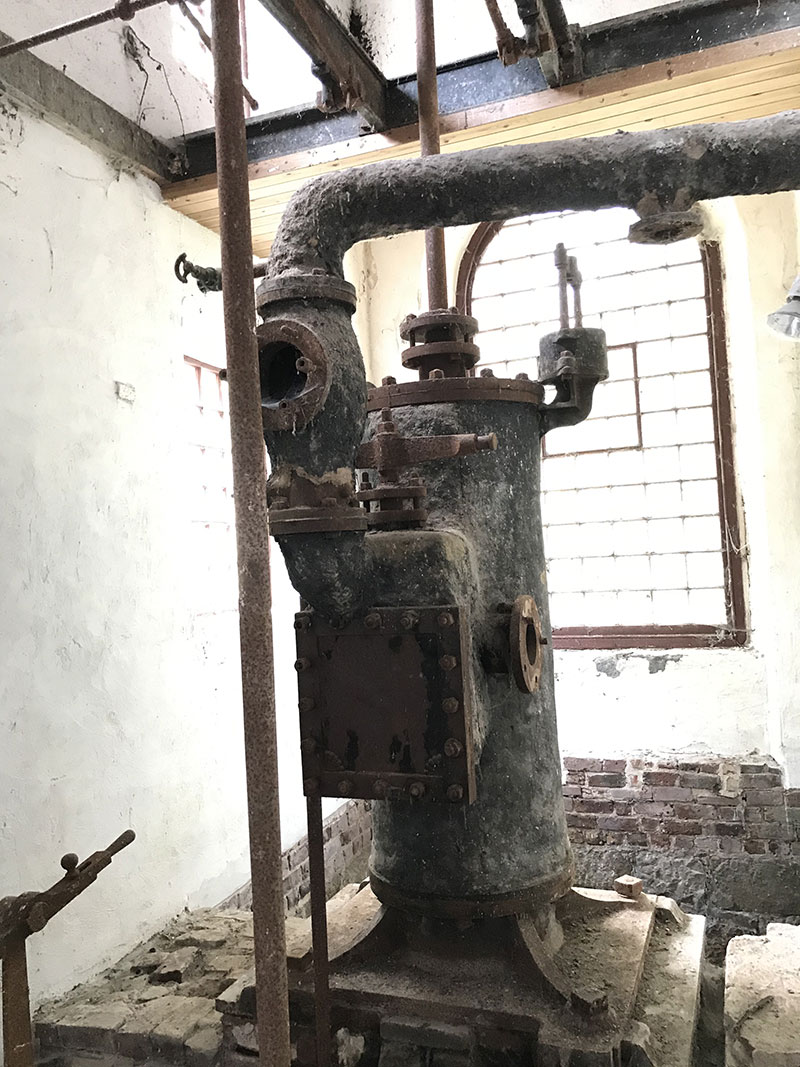 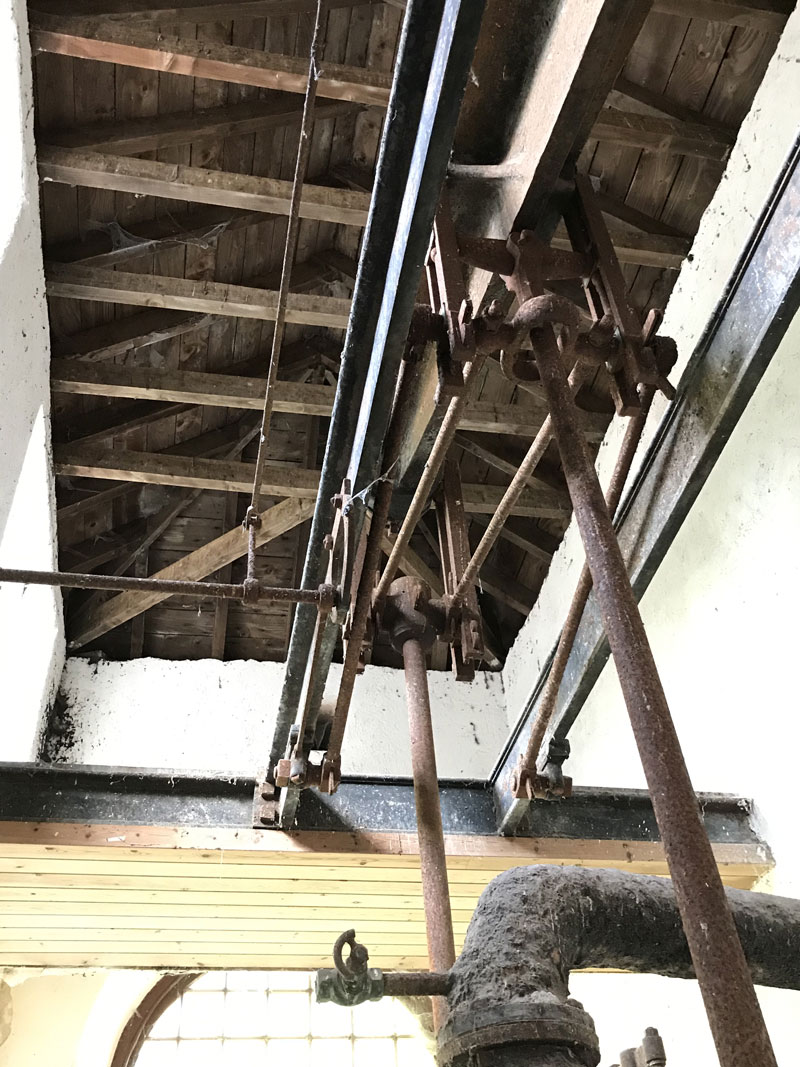 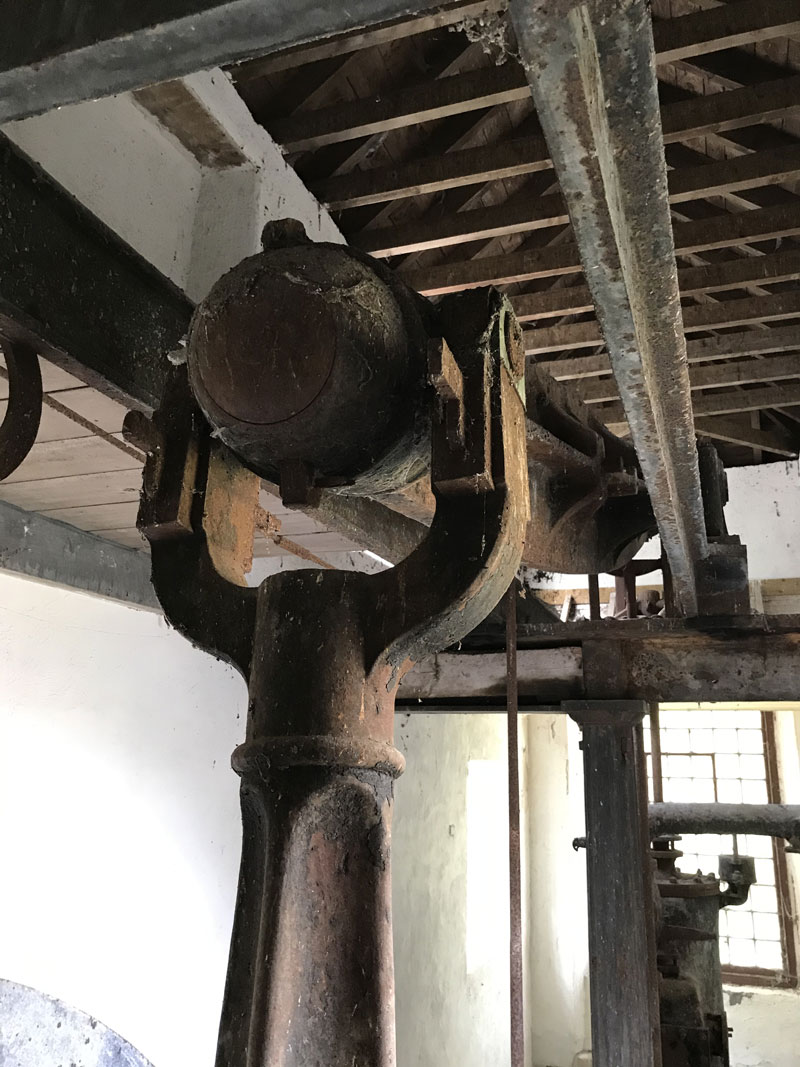 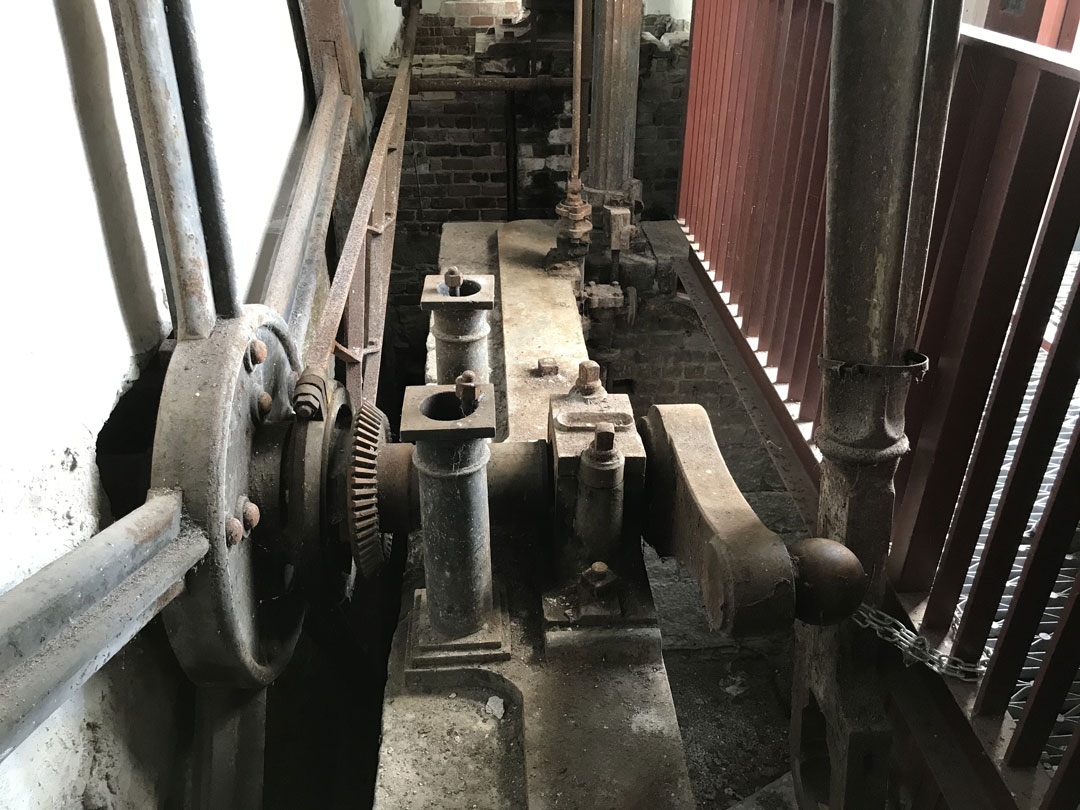 Close up of eccentric on crankshaft for operating the valve gear. Note the two short columns which supported the Watt governor for controlling engine speed (removed and set aside in the 1990s) 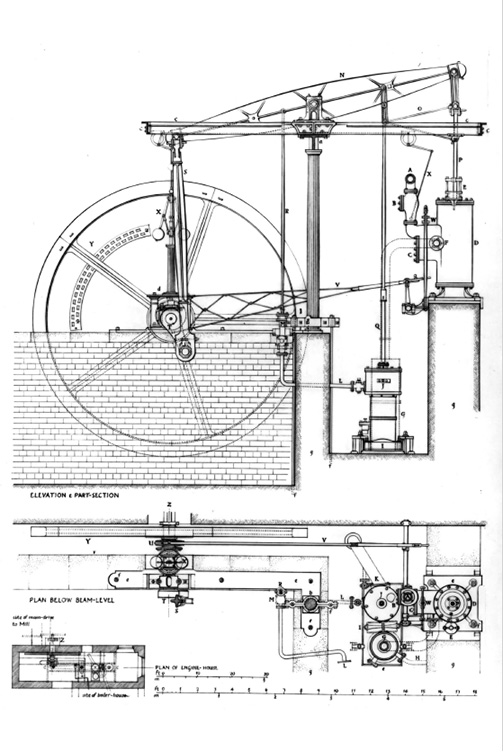 Side and top view of the beam engine 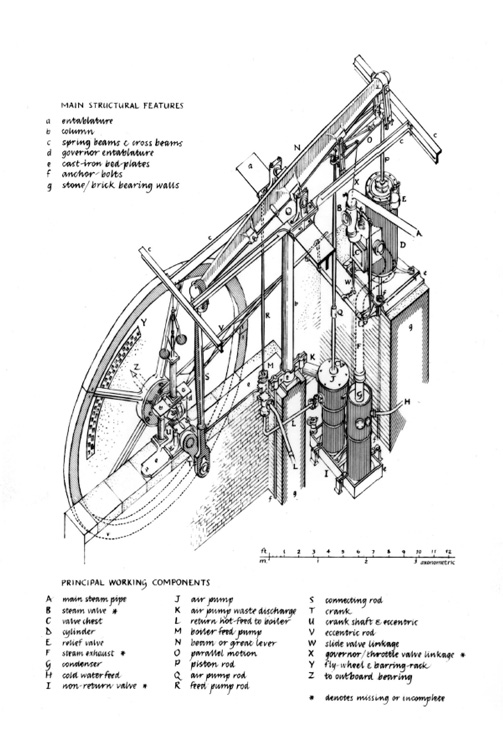 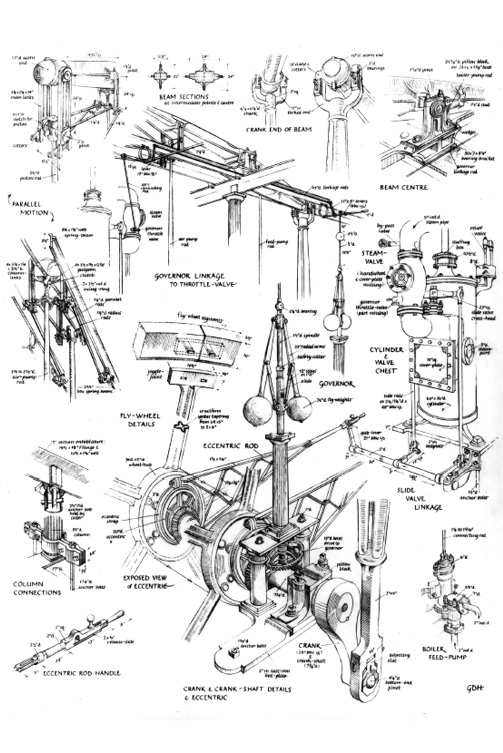